On Monday, Donald Trump delivered his first Memorial Day address as president, paying respect to the men and women who gave their lives serving their country and thanking their families for their sacrifice.

“Their undying loyalty, unadulterated love, and unwavering bravery were beyond description. Every day, we pray that we will be worthy of not only their devotion and sacrifice, but also that of the loved ones they left behind “A quote from Trump. “Extraordinary, extraordinary people,” he emphasised. 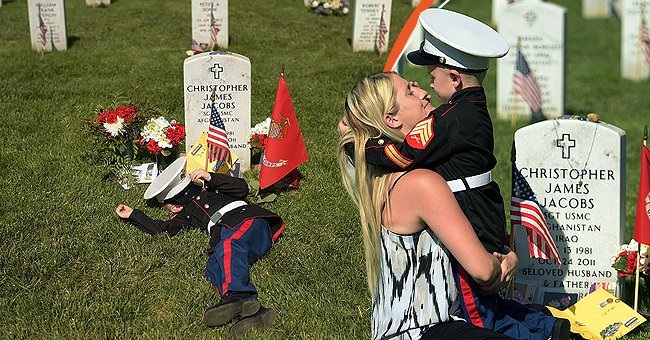 As the president’s convoy crossed Memorial Bridge over the Potomac River, the clouds parted and sunlight pierced through. When he arrived, he was met with a 21-gun salute.

During his visit to Arlington National Cemetery, Trump laid a wreath at the Tomb of the Unknowns while dressed in a dark blue suit with a light blue striped tie. He then stood at attention while a bugler from the United States Army played taps.

The President then Made his Way up the Steps to the Marble Amphitheatre in the Cemetery.

“In this sacred place, we remember the brave souls who paid the ultimate price so that we might live free. Our hearts go out to the heroes who charged into the line of fire, the thunder of combat, and the very jaws of hell itself in an effort to vanquish the forces of evil “Donald Trump declared.

Captain Andrew D. Byers of the United States Army, from Colorado Springs, and Specialist Christopher D. Horton, from the Oklahoma National Guard, were the two troops he singled out for special recognition for their deaths in Afghanistan. Family members sobbed as they received a standing ovation from the crowd.

Trump Acknowledged Ex-Senator Bob Dole, Who Was Seriously Hurt in WWII. Dole, Who is 93 Years Old, Got Out of his Wheelchair to Applaud.

John Kelly, the secretary of homeland security, whose son Robert was murdered in Afghanistan in November of 2010, was also thanked by the president. Trump went to Section 60 of the cemetery, where Robert Kelly is buried, after his address.

This president met with other bereaved families during his tour. A yellow rose was presented to him by Alison Malachowski, whose son Marine Staff Sgt. James Michael Malachowski is interred in Section 60.

Chat with a Young Child

Trump also took time out to chat with a young child who was wearing a clean Marine Corps uniform. Christian Jacobs, at age 6, lost his father, Marine Sgt. Christopher Jacobs, in 2011 at Twentynine Palms, California, during military training exercises. Boy and his mom, Brittany Jacobs, paid a visit to his dad’s grave.