Overnight, strong storms in southeast Texas knocked down trees, electrical lines, and even a gas terminal, leaving thousands without electricity and damaging many homes and businesses.

CenterPoint Energy reports that as many as 66,000 customers lost power when a series of severe thunderstorms swept through the area shortly after midnight. Only 5,200 residences and businesses in Harris County remained without electricity at midday on Saturday. Entergy Texas, which serves most counties north and east of Houston, reported 5,300, a decrease from its peak of 19,000. 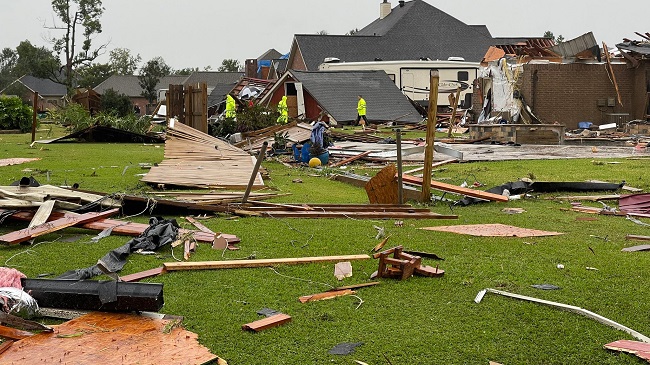 Meteorologist Dan Reilly from the National Weather Service estimated that the entire line of storms had sustained winds of 30–40 miles per hour, with gusts of at least 60 miles per hour in some locations.

The Woodlands had a tree fall on their home, frightening a family of three, and southwest Houston saw a gas station’s port collapse, but both areas took the brunt of the storms.

On Saturday, authorities in Louisiana reported that the storms had claimed the lives of at least three individuals there, including an elderly couple whose trailer had been destroyed. A automobile flipped into Five Mile Creek near downtown Dallas on Friday night, according to authorities, killing one person. It is unknown if the crash was caused by weather.

Houston police spokesperson Kese Smith stated that officials in the city monitored the storms from the Office of Emergency Management until around 1:30 a.m., and that no serious problems occurred during that time.

According to Reilly, the storms’ downbursts and high-velocity gusts are to blame for most of the devastation.

The stronger winds “periodically downburst” and “push out with the wind,” Reilly explained. If the wind is blowing in that direction, the destruction will be laid out in a straight line.

If these bursts are particularly strong, they are called “microbursts,” although Reilly claims there is no indication that this type of microburst happened during the nocturnal storms. Reilly added that radar showed evidence of spinning storms, which could be evidence that tornadoes made landfall.

“At this time, we are unable to corroborate that,” he stated. It was reported that one such storm had formed near Hobby Airport.

A gas station in Buffalo Speedway and trees in The Woodlands are just two examples of the damage reported to the weather service.

There was a gas leak report at 11 p.m. after a tree fell on a house on Drybrook Road, causing the Spring Fire Department to react.

Benjamin Bailey claims that the powerful wind struck at 11 p.m., while he was watching television. A tree crashed through the roof and shook the house a few seconds later.

Bailey stated, “The first thing we thought about was our baby.” Thankfully, Bailey, his wife, and their 10-month-old child were all unharmed.

He described hearing a loud smash that sounded as though the wind had suddenly picked up significantly. It was incredibly upsetting when the tree crashed through our kitchen and through the rest of the house.

Bailey claimed that the wind was so fierce that he feared the tree’s fall would also tear off the top of his home. Within minutes, firefighters from Spring and other friends and neighbours had arrived, according to Bailey.

At 10 p.m. on Friday, the police in Somerville reported that the whole town was without electricity.

Tornado watches were issued for a short period of time in Chambers and Galveston counties, while warnings were issued for Fort Bend and Harris counties. All of those restrictions are now gone.