The multi-billion dollar race to the stars continues. On July 11, Richard Branson took a trip on a test flight for Branson’s Virgin Galactic space tourism venture, beating Jeff Bezos by more than a week to space.

Now, Bezos hopes to fly with his brother Wally Funk, an aerospace pioneer, and a lucky adolescent on Tuesday, the first passenger flight for Blue Origin, Bezos’ competing space business. 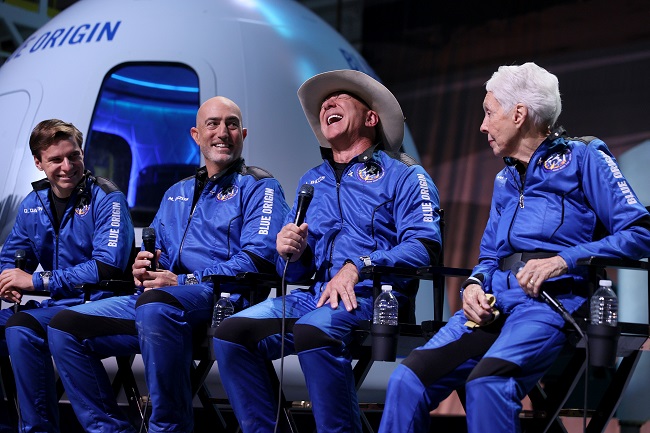 A Race of Richard Branson vs. Jeff Bezos

It was a month ago that Bezos, who stepped down as Amazon’s CEO this month, announced his July 20 spaceflight. This would have made him the first billionaire space entrepreneur (a group that includes Richard Branson and Elon Musk of SpaceX) to attain suborbital flying using a rocket built by his own company.

It was thus seen as a calculated attempt by Branson to outdo Bezos by scheduling his own trip on a Virgin Galactic spacecraft just nine days before Bezos’ flight. Before his voyage, Branson told that Bezos’ ambitions had little impact on his own announcement, although he minimised the competitive nature of the space race.

He added at the time, “I think both of us will wish each other well, and it really doesn’t matter whether one of us travels a few days earlier or later.” ” Bezos had praised Branson on Twitter when the Amazon CEO announced his aspirations for spaceflight in June, but Branson had also advised his fans to “watch this space” at the time.

On Sunday, he will Take off From a Facility in New Mexico Known as SpacePort America.

A livestream will begin at 7:00 am local time, the company has said, though the exact time has not yet been announced.

After taking off from a runway, the carrier plane releases the VSS Unity spaceship at an altitude of 50,000 feet.

The two VSS Unity pilots fire up the rockets, taking the ship to Mach 3 and well beyond the 50 miles (80 km) altitude that the United States recognises as the beginning of space.

There will be a brief period of weightlessness during which Branson and three other Virgin Galactic employees can relax and enjoy the ride.

There’s more in common between these two than meets the eye. Bezos and Branson, both 70 and self-made billionaires who founded multi-billion dollar enterprises, are both putting their money into projects that are based on their personal enthusiasm for space exploration.