Slicing through the supporting cast, Gunpowder Milkshake takes its “John Wick” concept and runs with it,

establishing an assassins’ secret society, lending library, and world-building comparable to those of the Keanu Reeves movies. 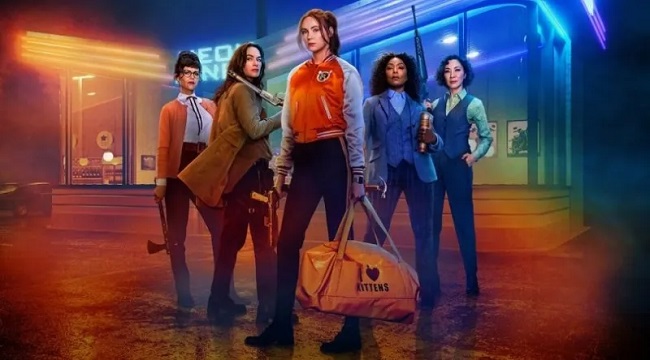 Sadly, the picture fails on a number of fronts, most notably its story. Unattractive fight sequences that include Sam (Karen Gillan), a second-generation murderer for hire, and a slew of interchangeable male meat are the norm.

Moreover, despite the fact that the picture features an impressively diverse group of female actors (Gillan is joined by Carla Gugino, Angela Bassett, and Michelle Yeoh), the film doesn’t seem to care about the characters’ femininity.

As a matter of fact, despite having committed her fair share of massive destruction using a camper van-mounted supergun, the most archetypally feminine of all the women—the one with maternal instincts and empathy—does fairly poorly in the eventual final battle. It’s a lot of work.

Like many popular action films, Gunpowder Milkshake was an amalgamation of genres. Compared to the John Wick flicks, this picture has a light tone, a group of crooks searching for an assassin, and a setting in the Continental Hotel. Due to Sam and Emily’s connection, Gunpowder Milkshake also had a lot of Leon. Emily was forced to listen to a tape player while the action was taking place in Face/Off by John Woo.

Unlike contemporary action films like Snake Eyes, Gunpowder Milkshake has a distinct personality. Fans of action movies will enjoy this one.

Each elaborate volume (Emily Dickinson, Charlotte Bronte, Virginia Woolf) is a false book concealing a compartment that hides a weapon, and the whole room is a metaphor for the positions to which women were historically relegated.

Carla Gugino (fiery), Michelle Yeoh (fiercer), and Angela Bassett (fiercest) play the Librarians in charge. Bassett is so vicious in this part that she acts it out as if she were portraying the sister of Marsellus Wallace. Murderers at a library typically use firearms.

The Librarians are armed to the teeth with hammers, chains, knives, gas grenades, and an axe (Michelle Yeoh swings that chain like a champion Western lasso player), and Papushado makes one spectacular music choice, choreographing a sequence of extraordinary mayhem to Janis Joplin’s “Piece of My Heart.”

Furthermore, he slows down a death-trip showdown at the diner so that we may fully appreciate the intensity of the women’s mutual resentment.

It’s been decades since males stopped at nothing to devour righteous, blood-splattering pulp action rides like this one, and if ladies are now yearning for the equivalent, “Gunpowder Milkshake” is it. The message it sends is that eliminating bills is a high priority.